Note: Peter’s GTD story is in a different format. Rather than the Q&A of recent installments, Peter’s story is an email he sent to David Allen. In it, he describes how he came across GTD, what tools he has used, and the positive impact it has had on his life.

I have had this on my Someday/Maybe list for at least a year, and now I’ve finally snuck a moment to write to you. I want to say, as strongly and fully as I can, thank you! What you have given me, and so many others, with GTD has been utterly life-changing and eye-opening.

In the interests of making it easy for you to process your email: The following is my story of coming to use and champion GTD, as well as an attempt to unequivocally make it known to you that you can count on me, as a devoted convert, to do whatever I can to help spread GTD from my current circumstances in the UK. So, from my point of view, I’m not presuming any next action on your part, but if you want to read this it will take more than 2 minutes. 😉

I discovered your book shortly before proposing to my now-wife. It was early 2016 and I was flailing around feeling the need to sort my life out if I was ever going to get out of my not-so-lucrative freelancing rut, find a new job, and ask this gorgeous gal to marry me. Your book came to my attention coincidentally: I applied for a PA role in a church at Muswell Hill, and the job description said, “this vicar uses Getting Things Done by David Allen.” As part of my research for applying for the role, I downloaded the abridged audiobook of your 2001 edition from Audible, and found myself making numerous notes, listening to it over and over again. I didn’t get the job, but I couldn’t stop listening and looking into GTD. Then, when my soon-to-be fiancé and I were attending a couples day at her church, one of the presenters made the not-so-original joke that “my life is so busy, I’ve even been recommended this book called Getting Things Done by David Allen, which I’ve never got round to reading.” A humorous moment with a light touch, but it was just enough to solidify my conviction, “you will need to use this methodology!”

I went for full implementation: setting up in-trays, scanning my then bachelor-pad flat for anything that didn’t belong where it was, the way it was, and then processing them according to the core five-step model of horizontal GTD workflow. I began using a simple “reminders” list manager and ordered all my next actions according to their projects. This, alone, was astonishing: the mere act of defining the desired outcome, the associated next action, and then placing them on those lists, resulted in a palpable sense of relief, almost physically, from the forefront of my brain. I realised further down the line that I had missed out on the use of contexts for batching and ordering next actions. Ordering them by project made doing errands very difficult! Eventually, I wised up to this practice by buying and listening (repeatedly, again!) to your full 2015 GTD audiobook edition, watching countless videos about your methodology on YouTube, and setting up better list managers according to the setup guides on the GTD website. The GTD Weekly Review® soon followed. It was very hard to implement at first, but now it’s an essential part of the week and I do not feel comfortable getting to Sunday without having conducted one.

GTD has done so much more in my life, however, and for those around me. I proposed to my then fiancé, and we used GTD to plan our entire wedding. She has said herself “GTD saved our wedding!” We set up a devoted email account for wedmin, with @action and @waiting for tabs and split inbox views, along with maxing out Google drive for spreadsheets of guest invites, timetable scheduling, and sub-projects—whatever was necessary to getting our wedding, honeymoon, early days of marriage, and general life admin off of our minds. One person was astonished, a week before our wedding, to hear that neither of us were feeling stressed. He exclaimed, “You must be stressed, surely!” My reply was that, yes, of course we have been through emotional rollercoasters and ups and downs at the higher horizons, but as for the Ground and Projects levels, that was all off our minds and in a 52-page wedding management pack for the best man to deal with!

My wife started using GTD too, beyond our wedding prep. Professionally, she event manages a church orchestra for a charity with a skeletal team and modest budget, and she shares the same feeling about GTD as I do: “I cannot believe how I ever survived before it, and cannot imagine life without it.” She was keeping a horrendous amount of stuff in her head, but since applying GTD, it all became processed into project plans, project and next actions lists, including agendas for her staff team. My wife and I also use GTD in our personal life. We are set up on a shared list manager where we store projects and keep context-based next action lists, including “errands” and “to discuss.”

As for the desire to get out of my freelancing and into a full-time job, GTD has helped with that too, and is beginning to infiltrate my workplace. I set up a GTD-based system on Trello for tracking the journey, kanban-style, of my job search. Eventually, I landed my job at SPCK, a Christian publishing organisation, and I have been promoting GTD at every opportunity. I was interested to see how GTD would hold up when applied to a professional context, and surely enough, it proved to be just as powerful and game-changing. My very first question, on my first day of work in the office, was, “Do you have any in-trays”? They didn’t, so I ordered some to arrive the next day. I can’t tell you what a difference even something like that makes! As the new tasks, emails and information began to flow in, I began to feel the stress building in my head. I had no GTD system yet, and the pressure was mounting. Then, those in-trays arrived, I set them up, and also settled on my choice of GTD tool. (I was toying with Outlook vs Wunderlist—am now on Todoist.) Immediately, my locus of control was restored and the raw “stuff” of this new job could flow through it. Last year, I was promoted from Digital Content Assistant to Digital Production and Workflow Executive. This was, hands down, thanks to GTD. I could not, and still would not be able to, manage my work without it. My newfound enthusiasm for creatively streamlining workflow is now at the heart of my professional work. Our annual plan for SPCK has, “What does success look like?” as a core theme for our staff development.

Work graciously allowed me to go on the Next Action Associates GTD courses, and a working relationship with them is growing as we speak (James Harwood having recently lead a GTD exercise session on our most recent staff away day). I attended the GTD Level 2 course (I considered myself self-taught for Level 1, which turned out to be sufficient) and I had the privilege of being on the first-ever GTD Level 3 seminar in the UK, led by Todd Brown. I am hoping that work will approve me to go to the GTD Summit in Amsterdam. A chance to meet you, perhaps? It has been a tremendous joy and a buzz to attend these courses and to get to know folks such as Todd Brown, Ed Lamont, and James Harwood. 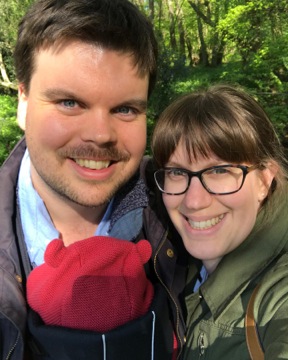 Finally, I ought to round this off by saying that GTD has been vital for enabling my wife and me to juggle two massive projects simultaneously. The hashtags for these two projects (my wife and I were using Wunderlist at the time) were #newhome and #BabyByrom1. Yep, we moved home and had our first child at the same time. In fact, we moved house on the due date! These two projects broke down into numerous sub-projects and, once again, GTD enabled us to be extremely busy (hopefully appropriately so), while not necessarily being stressed. After successfully moving house, our daughter was born on 14th March 2019! Project completed, and a whole new area of focus has sprung forth.

I want to make it clear to you, if I haven’t already, that I have become passionate about and devoted to spreading GTD. I have made it an area of focus to support Next Action Associates and general GTD promotion at every opportunity. Our society desperately needs GTD not just for productivity’s sake, but for our relational integrity and general mental health. GTD has also helped with my own anxiety, an issue which was ultimately existential and Horizon 5 in nature. But boy does GTD help you to turn your cognitive upkeep around and get your focus where it needs to be! I have lost count of the number of people I have recommended GTD to, and I hope there will be many more to come and on a grand scale. GTD absolutely works, and your years of hard thinking and effort, to arrive at simplicity on the far side of complexity, has been eternally worth it.

So, what more can I say other than a massive thank you, David, and consider me at your service. (You are welcome to quote from this testimonial if you wish, also).

With warmest regards, heaps of gratitude, and much excitement for the future of GTD! God bless you sir!

This site uses Akismet to reduce spam. Learn how your comment data is processed.